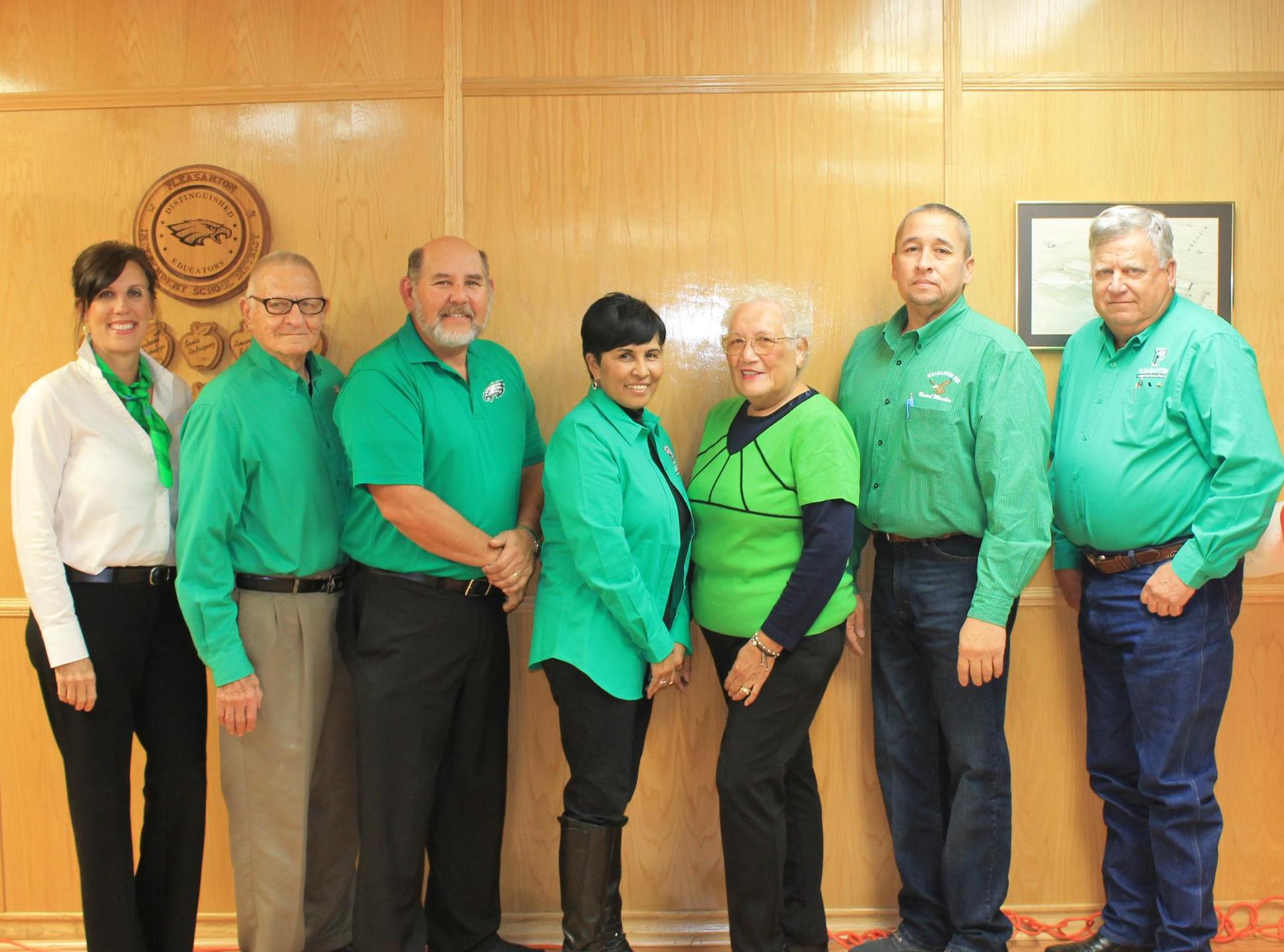 Pleasanton ISD Board Members
Frank A. Tudyk Jr. (Butch), President
District 3 (Term 2017-2021)
Coach Tudyk ( President ) was appointed and then elected to the Board in 2006., Elected May 2017 . He was born in Poteet and has spent all of his life in Atascosa County. He has served the school districts of Poteet, Charlotte and Pleasanton as a teacher/coach and Athletic Director for over 40 years. He is the father of two sons and one daughter who are all highly successful in their careers. Mr.Tudyk has several grandchildren who enjoy coming to visit him on his ranch near Pleasanton.
Most people in the community know Mr.Tudyk as “Coach” and refer to him fondly, as he spends lots of his time doing community service for those in need. When asked why he wanted to become a trustee he said, “I believe that education is one of the most important parts of a community and I want to play an active role in helping shape the community and the lives of its children."
Blasa F. Chapa, Vice President
District 1 (Term 2017-2021)
Blasa Chapa was elected to the Board for the first time in 2002, elected 2006 , unopposed elected May 2017. Ms. Chapa was raised on a ranch near Bracketville,Texas with 5 siblings. She stated that she came from a close family who believed in helping others where ever needed. Ms. Chapa and her husband have lived in Pleasanton for over 25 years. Ms. Chapa and her husband Art have two sons, one daughter and several grandchildren.
Gerald Guerra
District 2 (Term 2019-2023)
Patricia Seay Cox, Secretary
District 4 (Term 2015-2019)
Pat Cox was appointed October 13, 2015, unopposed elected  May 2017.
Her family has deep roots in Atascosa County. Her father, a farmer and rancher, has recently turned over operations of their family’s 5th generation farm to her and her sister. Their farm specializes in turfgrass production where day-to-day operations are handled by Pat and her husband. She and her husband are both PISD graduates and have spent the majority of their lives living in Pleasanton. Together, they have 4 children: One is married and resides with her husband in Tilden where they are raising their two granddaughters. One, working for the City of Tilden. One, recent graduate of The University of Texas at Austin, preparing for law school and currently residing in Austin. And another currently attending The University of Texas at Austin. After graduating from Pleasanton ISD, She attended the University of Texas at Austin for two years, then attended The University of Texas Health Science Center at San Antonio where she earned an Associate of Applied Science Degree in Dental Hygiene. Pat has spent the majority of her career in Dentistry in Austin. She moved back to Pleasanton to work alongside her sister in their family’s local flower & gift shop – and to raise their family in their hometown of Pleasanton. Over the past 5 years, she and her husband have managed the day-to-day operations of their family’s sod farm. Pat is a proud 3rd generation graduate of the Pleasanton Independent School District, and her children will mark a 4th generation of PISD alumni. Her Grandfather served on the Leming School Board for many years, and her Father served on the Pleasanton School Board for 12 years. She is truly honored to accept this position to serve on the School Board as a 3rd generation Member and will strive to be an effective advocate for our Community’s educational vision and values.

Ralph Unger was elected May 4, 2019. He grew up in Bexar County south of San Antonio. His wife Annette works at Atascosa McMullen Co-op as diagnostician. She has worked in the education field for 31 years, starting out as a band director and then getting certifications in various fields of education. Mr. Unger's family were ranchers in Bexar and Wilson counties and also worked in construction. Mr. and Mrs. Unger have lived in Pleasanton 28 years. He volunteered as a bowling coach for many years working with beginning bowlers and teaching them the fundamentals of bowling. He has also served on the church council at church, as a council member and as an officer. His two daughters graduated from Pleasanton ISD. The youngest attends Texas Tech University where she is majoring in music education and their oldest just graduated from the University of North Texas with a degree in elementary music. Mr. Unger graduated from Southside High School in San Antonio. He received his Associate Degree from Blinn Junior College before transferring to Texas Lutheran University. He graduated from the University of Texas at San Antonio with a Bachelor of Music, Education, all level. Mr. Unger also received a Masters of Music in Education from the University of Texas at San Antonio. After teaching for 36 years he currently is retired. He worked at Elementary, Junior High and High School level as music teacher and band director in Kenedy, Charlotte and Pleasanton, Texas. His groups achieved many awards over the years including feature band at the Battle of Flowers Band Festival, numerous University Interscholastic League Sweepstakes, University Interscholastic League State Marching Band finalist, Texas Music Educators Association Honor Band finalist and sending many students to the University of Texas state solo ensemble contest where they received the highest possible rating, 1.

Before becoming an educator, he worked in the restaurant business and demolition. Currently Mr. Unger is working on the family farm, doing instrument repair and other small jobs. Mr. Unger would like to help the future graduates of Pleasanton ISD be prepared for whatever they choose as their next step in life.

Pete Pawelek was elected to the PISD School Board in May, 2015. He was raised on a working farm and ranch in Atascosa County and graduated from Jourdanton High School. Pete participated in FFA and he served as a Chapter, Area and State officer. He credits the individual and team competitions and the good example of his FFA teacher, Mr. McAllister, for the leadership skills that have guided him throughout his life. He attended Southwest Texas State University and came back home to help on his family’s ranch. Pete’s wife, Lynse, graduated from PHS in 1974 and has worked in the Pleasanton ISD for many years. Their four sons are Pleasanton High School graduates and his grandchildren are currently the third generation enrolled in Pleasanton schools. Pete has served community organizations including Atascosa County Stock Show Association, Pleasanton Young Farmers, and currently serves as President of Atascosa County Farm Bureau. Pete is proud to serve with the team of eight board members who are making important decisions that will have a positive effect on the education of students for future generations. He places a high priority on being an active voice for the members of his district and being an advocate for the teachers and students of Pleasanton ISD.